The afternoon of Sunday, November 3, was cold and windy. As the Fieldston Varsity Boys Soccer team zigzagged across the field at Manhattanville College, passing the ball back and forth and jockeying for a goal, the sun went down and the lights whirred into action.

This wasn’t just any game. The Eagles were playing against Trinity for the NYSAIS State Championship. Trinity had won the championship for the last two years, and a win would be a first for Fieldston. The pressure was on.

But the team wasn’t daunted, says co-captain Sebastian M., ’20. “Going into the game, we were definitely feeling confident,” he says. The previous time Fieldston faced off against Trinity, the Eagles won 3–0 — and the experience of having played against Trinity before gave the team a sense of what to expect.

Another shot of confidence came from the Fieldston fans who rode buses to the game to cheer on the team. Sebastian says the fans were vital to the team’s morale, especially early in the game when the Eagles were down 2–0. Despite the daunting score, the team kept their composure, and “it showed we had character,” says Gene Sepe, Varsity Boys Soccer Coach. “We’re a pretty calm team. We don’t let a lot of things bother us. If you stay calm, you can handle pretty much anything.”

The Eagles scored, scored, and scored again to take the lead, but Trinity tied the game just a few minutes later. Energy was high, and Fieldston scored one more goal, putting them ahead.

But there were still doubts — nothing guarantees a victory. Even when the team was up 4–3, Sebastian says he wasn’t sure they’d win. But everything changed with a minute left. The team had maintained its lead. “I looked at my co-captain, Jason, and I think I said something like: ‘We’re actually about to win this.’”

The team came together late in the summer for pre-season training, and “we went into camp not really knowing what to expect,” says Sepe. Sepe would have been happy just to see the team make the playoffs, but over the first games of the season, the team racked up wins. “We saw that our potential was a lot higher than we expected,” Sepe says. “We kept gaining momentum as the season went on, and it just snowballed.”

As the clock ran down to zero with Fieldston in the lead, the crowd erupted and rushed the field to celebrate. “It was an amazing feeling. It’s something I had dreamt about for a long time, but I never knew if I’d experience it. It was a moment I hope I’ll never forget, and the support from our friends and family made it even better,” Sebastian says.

“The fans were unbelievable,” Sepe says, his voice filling with emotion.

Though the team includes players in all four Fieldston Upper School grades, “the team chemistry was unbelievable,” Sepe says. The team is young and will lose just four seniors at the end of the year. Sebastian says this bodes well for the future, leaving the team “well-positioned for another great year.” Sepe echoes this point and notes that not only are the current members of the team exceptional, but talented 7th and 8th Graders are also on their way up.

As for years to come? “Sky’s the limit,” Sepe says. “The future looks bright.”

The Class of 2020 Finds Community at Graduation 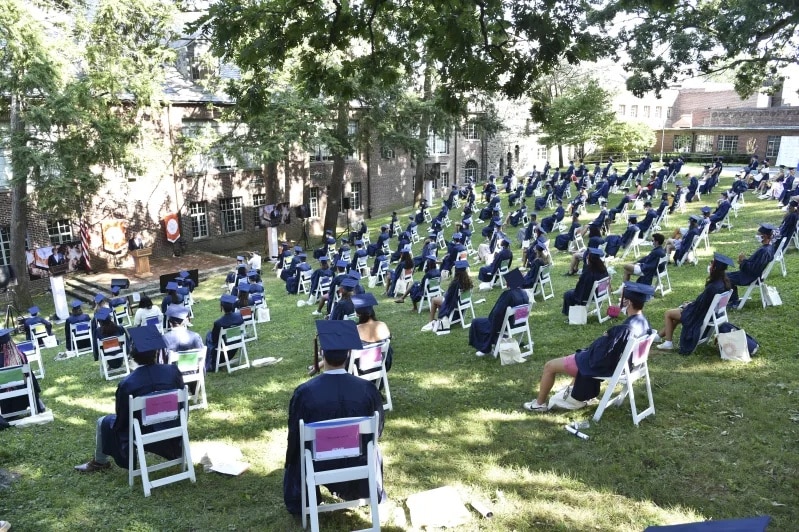 From Lake to Lab: Pushing Science Skills One Step Further