The Ethical Culture Fieldston School believes that a progressive education should be relevant, responsive, and — above all else — ethical. Therefore, faculty at Fieldston Middle did not miss the opportunity to spend the first few months of the academic year finding ways to connect their curriculum to the 2020 election. While not yet old enough to vote in the election, Fieldston Middle students are nonetheless immersed in projects and lessons that are helping them to become educated citizens and ethical leaders.

On a Friday morning in October, as 6th Graders trickled onto Google Meet for Ethics class with Abena Koomson-Davis, Chair of the Fieldston Middle Ethics Department, they were joined by a special guest. Diane Burrows, Co-President of the League of Women Voters of the City of New York, smiled and waved from her square on the screen as more students joined the virtual classroom.

Burrows visited every 6th Grade Ethics class to speak with students about both the history of voting rights and ongoing voter suppression in the United States. Her visit was part of the 6th Grade service learning project, for which students sent postcards to people in New York City encouraging them to vote in the 2020 election.

When considering options for a service learning project for the fall, Julianne Dow, Fieldston Middle and Upper Ethics Teacher, wanted to find something that could be done remotely that would also in some way relate to the upcoming election. She reached out to the League of Women Voters — an organization Dow’s mother worked for in the 1950s — about the possibility of a partnership. Burrows was eager to get involved. She suggested the postcard project: The League of Women Voters would provide the names and addresses of registered, unaffiliated voters in New York City who had not voted in recent elections — and offered to join the 6th Grade classes to share her knowledge of voting rights with the students.

Burrows kicked off her visit by asking students to use the chat feature of Google Meet to share issues that matter to them. Students were quick to respond: Nathaniel S. ’27 wrote, “racial injustice and climate change.” Sara G. ’27 shared that she cares about “healthcare,” while Aris K. ’27 added, “Coronavirus.”

Burrows explained that in a representative democracy, we strive to elect leaders who care about the issues that matter to us. Our power as citizens comes from our ability to vote for these leaders. However, Burrows noted that voting is not the only source of power — those who cannot vote may use their voice to make themselves heard. “Your voice is a very powerful thing,” said Burrows. “And it doesn’t have to be your voice out loud.” Burrows noted that using one’s voice can include joining demonstrations and marches, writing or calling local representatives, and sending letters to voters, as the students would do.

When you entrust young people, they rise to the occasion.

After illustrating the value of using one’s voice, whether through voting or advocacy, Burrows outlined a brief history of the uphill battle faced by women, people of color, and indigenous peoples for the right to vote in the United States. While the right to vote is widely touted as inalienable for all U.S. citizens, Burrows explained how instances of voter suppression — through disenfranchisement of felons, gerrymandering, discriminatory voter ID laws, polling location changes, and issues with the Postal Service — are targeted at people of color and represent an ongoing threat to democracy and the constitutional right to vote.

After the presentation, students were eager to share their reactions to what they had just heard. Nathaniel S. ’27 said that listening to Burrows “educated me on what happened and how people ended up being able to vote.”

Sara G. ’27 was inspired by the presentation to take action. “Before it seemed hard to know what to do,” she said. “But now it’s like, you simply have to speak up. You can use your voice to make a change.”

Following Burrows’s visit, the 6th Graders each wrote five postcards, all containing the same bipartisan message encouraging New Yorkers to vote in the 2020 election, along with crucial information on how to do so. Students decorated their postcards with drawings, stickers, and bright colors. The project gave students the opportunity to use their voices to support democracy and broadcast the importance of voting.

“Activating 6th Graders and reminding them of their power and their capability has been a real bright spot in this project,” says Koomson-Davis. “When you entrust young people, they rise to the occasion.”

The project was cross-divisional as well: Fieldston Upper students in the Community Service Advisory Board class helped to place the postcards — over 600 of them — into their envelopes before they were put in the mail.

The 6th Grade service learning project is a stunning example of how, in the hyflex model, students have opportunities to get offline and be creative — all the while engaged with work that strives to better the world. In 7th Grade Math, students study various methods of voting used within the United States — including majority, plurality, Borda count, sequential pairwise, and instant runoff — and how each system can affect the outcome of an election. After analyzing these different voting systems, students create and hold their own elections between three “candidates” using two of the voting methods they studied.

The students are encouraged to be playful while creating their elections — one might ask which flavor of ice cream is the best: chocolate, vanilla, or strawberry. They are expected to run a campaign, creating flyers for each of their “candidates.” This year, voting will most likely take place using Google Forms to accommodate students who are remote. Once the voting is complete, students will analyze the returns to see how the different systems of voting may have affected the outcome.

“We want them to look at the numbers, pay attention to what the numbers tell us, and think about which one is the fairest,” says Jennifer Clemente, Fieldston Middle Math Teacher.

Other than demonstrating the values or shortcomings of different voting systems, the project gives students experience in data collection and interpretation, as well as a reminder about the importance of careful, meticulous work. “The weight of an error is significant,” says Stuart Quart, Fieldston Middle Math Teacher. “Maybe not for choosing your favorite ice cream flavor, but if you’re thinking about the bigger picture, errors are very significant.”

The Math teachers hope that students will take the knowledge they gained from this project and apply it to the real world. “If there are advisory elections for student government, we’re hoping a student says ‘we shouldn’t just say whoever gets the most votes wins,’” says Quart. Instead, students will be able to choose a system of voting that guarantees the fairest outcome based on the circumstances.

While the project does not directly involve the 2020 election, students were quick to draw their own parallels to the world outside their classroom, raising questions about the popular vote and the electoral college, and discussing whether or not this is a fair system for determining the outcome of an election.

Both Clemente and Quart say the project has inspired students to talk to their families about voting. One student was able to educate his parents about Borda count, a system of ranked voting they were unfamiliar with. “When they’re talking with their parents about voting, students can say whether or not the method used is a good one and discuss which way might be better,” says Quart.

“Students are being brought into the conversation and can contribute based on what they’re learning from their peers and from these methods,” says Clemente. “They are eager to share what they know.”

In 8th Grade History, students are writing op-eds focused on an issue of their choosing from the 2020 Presidential election. Before writing their own articles, students will read an op-ed from “The New York Times” to familiarize themselves with forming an argument and expressing their viewpoint.

Jesse Klausz, the Fieldston Middle History Teacher who designed the project, hopes that students will be able to investigate and understand their priorities and interests from a bipartisan perspective. “In many cases, students have more complex ideas about issues than can be expressed by either party or candidate,” says Klausz.

Through writing these op-eds, students will further investigate an issue that is important to them, and by doing so, they will have the opportunity to look more closely at their own values. By having the project coincide with the 2020 election, Klausz is hoping that students “will understand how voting and other forms of advocacy can allow them to pursue those values.”

The project is also an opportunity for students to practice a new form of writing and hone their research skills. Klausz notes that students will spend time evaluating sources for their op-eds, being mindful of information that may be politicized, misleading, or false.

Whether through learning about different methods of voting, writing op-eds about issues they’re passionate about, or sending postcards encouraging their fellow New Yorkers to vote, Fieldston Middle students are engaged in a relevant and responsive education that is preparing them to be ethical leaders in the world. 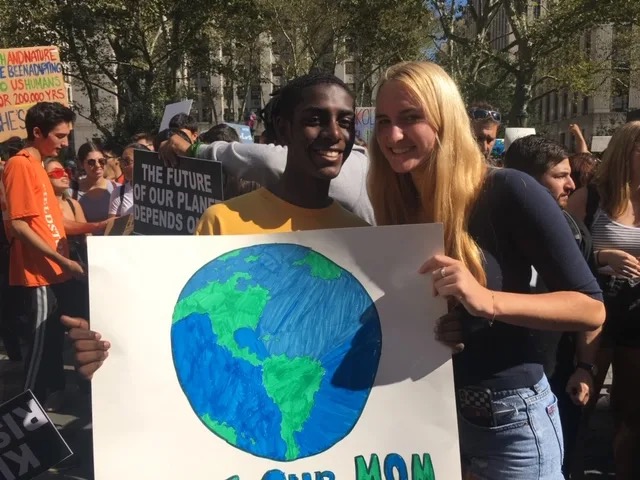