The computer screen fills with dozens of smiling faces as students from the Ethical Culture Fieldston School and the Riverside Language Program (RLP) come together for a virtual gathering. Each year, Fieldston Upper students from Introduction to Community Service (ICS) and Community Service Advisory Board-In Training (CSAB-IT) meet with students from RLP who have recently immigrated to the United States and who are looking to practice their conversational English.

The partnership between Fieldston Upper and RLP dates back over forty years. Traditionally, students meet in person, where they sit in two large circles that rotate every few minutes to allow everyone to hold multiple conversations. This year, faculty from Fieldston Upper’s Community Service Learning Department and staff from RLP, with support from Jeannie Crowley, ECFS’s Director of Technology, were able to hold the event virtually, recreating the feeling of rotating conversations by using the breakout rooms feature on Google Meet.

In the weeks leading up to the event, Fieldston Upper students research the social issues and historical context surrounding immigration justice in the United States, eventually writing a paper on a topic of their choice. Students consider questions such as: Who gets to be a citizen in this country? What does it mean to be a citizen? Who gets to vote? How does immigration lead to the exploitation of labor — especially of Black and Brown people — in the United States?

While the students’ prep work is academically fulfilling, the most valuable lessons they learn take place during the event. “This is not about what you’ve read or what you think; this is now about what you’ve experienced,” says Aria Gee, Fieldston Upper Ethics Teacher.

The event begins with everyone together in one large virtual room. Shelley Topping-Omodunbi, Director of Public Partnerships, kicks things off with a warm welcome and quick explanation of how the event will function. With a few clicks, the crowd disperses into smaller breakout rooms, where the Fieldston Upper and RLP students will engage in casual conversation. Over the course of two hours, students will meet in three different breakout rooms, and conversations will range from favorite places to visit in the United States to television shows to stories shared by RLP students about their countries of origin.

After conversing with the students from RLP, Fieldston Upper students gather on Google Meet to reflect on their experiences. Many students express an appreciation of the struggles experienced by all immigrants, especially in light of the ongoing COVID-19 pandemic.

Devin C. ’24 shares that he was moved after speaking with a man who is adjusting to life in a new country and a new city, and attempting this monumental life change during a time when all of his classes and social connections are taking place online. “These challenges are enormous. Gaining this perspective is something that I will take away from this experience,” Devin says.

Zoe F. ’24 is grateful for the opportunity to broaden her worldview after a year spent with only her immediate circle. “Because of the pandemic, we haven’t been able to travel or connect with anyone who isn’t our own family or teachers or friends. Hearing a new perspective, for the first time in over a year, was really interesting,” she says.

“Going into the event, I didn’t know what to expect, especially during COVID-19, because I have not had an experience like this in a while,” adds Emma M. ’24. “In the end, I learned so much and got a totally new perspective on language learning and what it means to be an immigrant.”

By all measures, the switch to a virtual event was a success. Both Fieldston Upper and RLP students enjoyed meaningful conversations and uplifting connections with one another. Fieldston Upper students felt compassion for the struggles that the RLP students have faced, and grateful for the opportunity to learn from them and their experiences.

“This event really cultivates empathy that is inherent in each of our students,” says Vivian Matz, Fieldston Upper Ethics Teacher and Community Service Advisor. “That human-to-human connection helps them understand how important it is to never dehumanize or stereotype groups of people.”

James P. ’24 agrees: “It was a really great experience because there was so much to talk about and everyone was so nice. We all found common interests, and we had so many questions for each other. It was a really nice conversation, and I would love to do it again.” 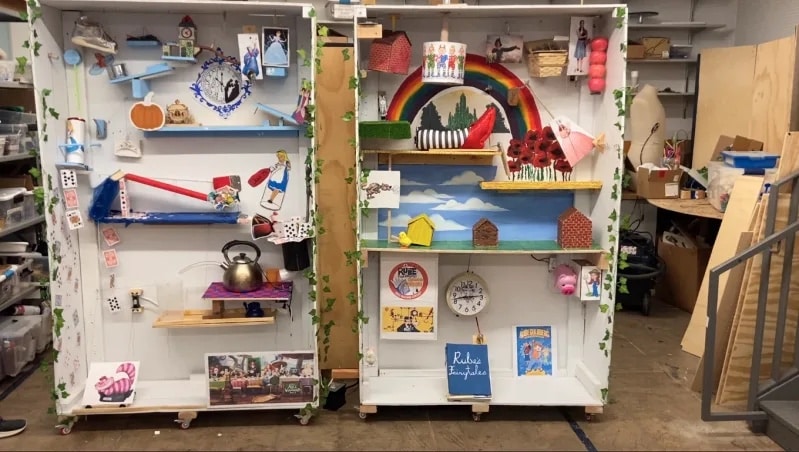 Engineering Moves on Up to Fieldston Upper