In four breakout rooms on Zoom, the Frida Fighters, Orange Armadillos, Greystones, and Kevin Is Muted ran through a list of questions. The pressure was on: They only had ten minutes to come up with all of their responses, and then they’d all reconvene in a bigger Zoom room to compare answers and tally scores. No Googling was allowed: Participants — adult members of the Fieldston Lower community — had to work from memory and their own wits.

In many ways, it was a classic Fieldston Lower community event: parents, teachers, and administrators coming together on a Friday night to catch up, crack jokes, and play games. That this year’s Fieldston Lower Adult Trivia Night — organized by Fieldston Lower parents Linda Kelly, Gayle White-Wallace, Jim Kelly, Andrea Schelly, and Tarah Murphy of the Fieldston Lower Social Committee — was online didn’t put a damper on the fun. In fact, the night was a welcome balm in the often-tiring last few weeks before Spring Recess.

The first round of questions was 90s pop culture, with prompts like “Which 90s dance craze came to the charts courtesy of Los Del Mar?” and “Michael Jordan retired from the Chicago Bulls and signed a contract with this Major League Baseball team in 1994.”

The second round was easily the most difficult: “Are you smarter than a Fieldston Lower 5th Grader?” (The answer was a resounding no.) With the help of a Fieldston Lower 5th Grader, organizers crafted questions based on each year of Fieldston Lower’s curriculum: “This seed can be easily found on the FL campus and contains a naturally occurring source of shikimic acid, one of the main ingredients needed to make Tamiflu.” or “This prefix denotes a factor of 10 to the negative ninth power.” This round, Fieldston Lower Principal Joe McCauley notes with a laugh, was “humbling.”

Then came a break for “Name That Tune,” wherein organizers played clips of songs and participants raced to enter the corresponding song titles into the chat. Bob Marley’s “Stir It Up,” Jimi Hendrix’s “Purple Haze,” and the Bee Gees’ “Stayin’ Alive” made appearances.

For the final three rounds, participants were asked to name the years of key events (“Vietnam War ends, the movie ‘Jaws’ is released, Jimmy Hoffa disappears,” for example), identify notable ECFS alumni (“Which White House correspondent from “The New York Times” is an ECFS alumna?”), and guess songs about New York (“This 1987 track, courtesy of the legendary group Boogie Down Productions, pays homage to the birthplace of hip-hop.”).

At the end of the night, a winner was crowned: Team Kevin is Muted. As parent Tommy Cooke put it, “If we had this much fun over Zoom, we can’t wait until we can all get together in person for a massive trivia night!”

“There was just a lot of laughter,” McCauley says. “It was hilarious.”

The Fieldston Lower Social Committee is taking this success and running with it: After Spring Recess, Fieldston Lower is hosting a Hip Hop Night for families. There’s been an unexpected benefit of the pandemic, Kelly says: “We’ve been able to find entertainers who aren’t necessarily in the New York area because they can be piped in anywhere.” Enter the Hip Hop Kidz, a Miami-based group that performs at events like the Miami Heat halftime shows. They’ll be leading the event, so, as Kelly says, “we can be rockin’ in a virtual way.”

While fun events like Hip Hop Night are often geared toward the entire family, it’s also critical to support the community of parents that exists at Fieldston Lower. In any year, says McCauley, it’s important to foster these parent connections, especially given how far-flung the parent body is at a commuter school. With families coming from Westchester, different boroughs, and even New Jersey, Fieldston Lower’s campus is not one where parents traditionally walk up to drop off their children. But they still find ways to connect — this year, online. “They really enjoy their time with one another,” McCauley says. “All of the parent social events that we’ve had were really well-attended, joyful experiences.”

“It’s very much a school community, being a Fieldston Lower parent,” White-Wallace says. “It’s very organic when we get together, very natural. We listen to each other, we feel very comfortable talking about issues, we check in on each other. I totally appreciate the support.” The Fieldston Lower Library Evolves to Meet the Moment 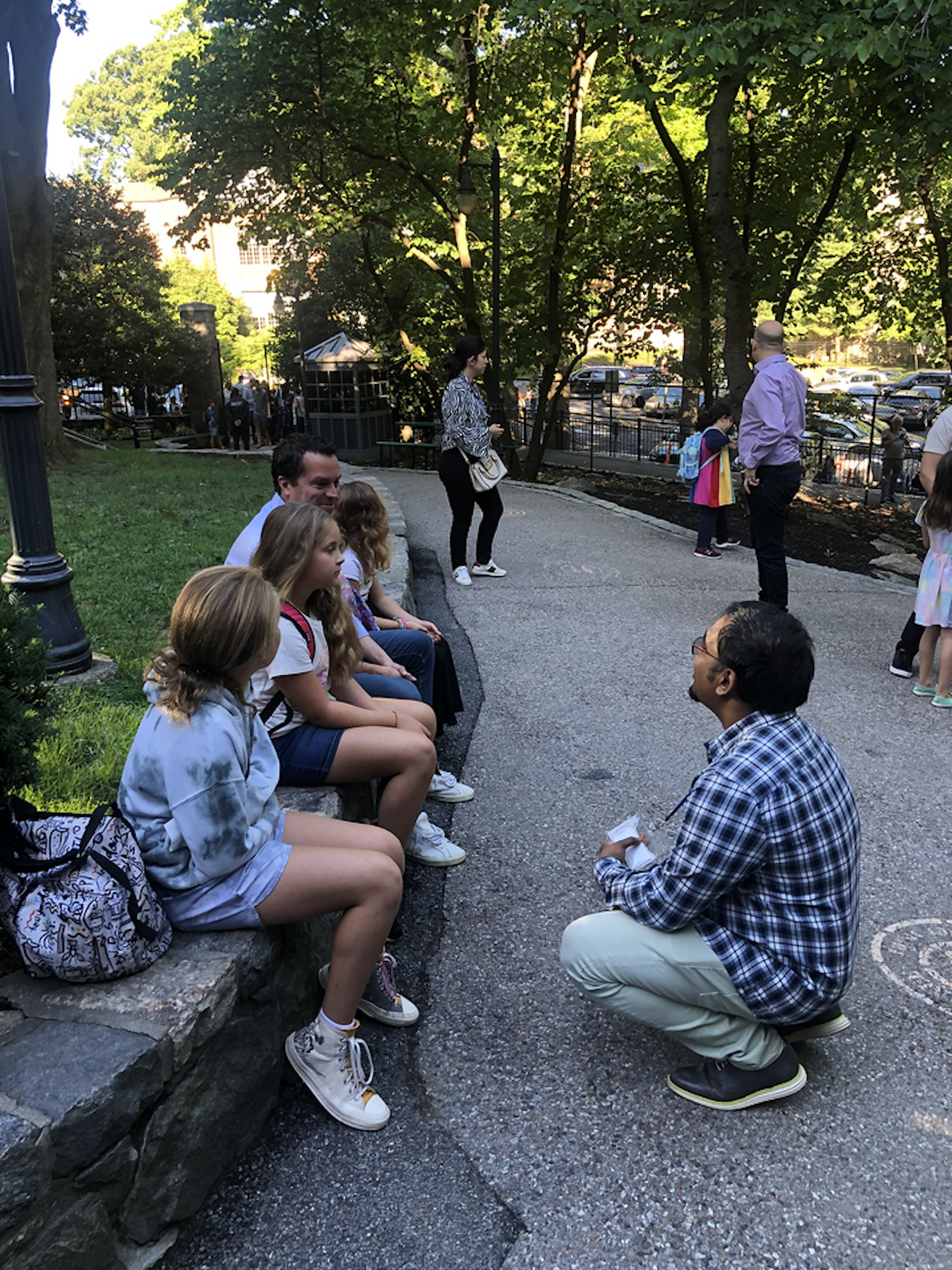