Toby Himmel — who spent 26 years as the ECFS Alumni Director and now supports the School as an Alumni Consultant — has witnessed the power of the Fieldston alumni community up close. “I used to tell students that they wouldn’t realize the value of their connections to other Fieldston students until long after they graduate, when they find themselves looking for a job, moving to a new city, or needing an introduction, and it’s your fellow alumni who pick up the phone to help,” says Himmel. “I tell them that if you mention Fieldston — they’ll take your call.”

Over her time working at ECFS, Himmel — who seems to have an encyclopedic knowledge of the School’s alumni — facilitated countless connections between alumni and current students, although she wouldn’t automatically make an introduction without first getting to know the student. But when Vivian Lee ’22 approached her looking for a connection to an alum working in medical research — a field Lee was acutely interested in — Himmel was already familiar with Lee from her involvement in the Females in Finance Club at Fieldston Upper.

Pollock’s interest in science took a more circuitous path than Lee’s. A member of the 14-year-club, meaning he attended ECFS from Pre-K until he graduated, Pollock was known for advocating for the causes he believed in — a self-described “campus radical” — but he was always interested in how the brain works. That interest translated into studying psychology at Boston University, earning a master’s degree in physiological psychology at University of Pittsburgh, and finally earning a PhD in neurobiology at Columbia University. He was excited by the work he was doing and sought out more opportunities in the medical research field, eventually leading to the NIH in 1996. His program at NIDA has identified the contribution of genes to addiction.

For Lee, her interest in medical research started at the school she attended before ECFS, where friends and classmates became addicted to drugs and were not given adequate support or resources. “After a friend became addicted to Percocet, I tried to get him help — but my concerns weren’t taken seriously because of a limited understanding about the causes of and treatment for drug addiction,” Lee says. She was frustrated by the inaccessibility of systems in place that should have supported her friends, and it motivated her to use her lifelong love of science to be a part of the solution. After arriving at ECFS in 10th Grade, Lee found herself in classes where she was encouraged to lean into her discomfort and turn it into action. “Fieldston gave me all of these opportunities to get more involved and advocate for the causes I care about.”

One of those opportunities was Fieldston Upper’s Fieldston Science Research Program (FSRP). The FSRP, which is designed for students who are highly motivated and independent learners with a passion for scientific research, is a two-year program that includes a summer research commitment. Students learn advanced laboratory techniques — including using centrifuges and PCR machines which separate and amplify DNA from samples — along with experimental design, scientific writing, and data analysis, all while collaborating with their teacher to identify a research lab in which the students will perform their summer research.

For Lee, being a part of the FSRP throughout all three years that she attended Fieldston helped to prepare her for the work she did with Pollock.

Lee felt a genuine connection to Pollock as soon as they met. “Usually, whenever I’d talk to someone about issues around drug use or drug addiction, people would get uncomfortable and try to change the subject, or shift the blame onto the addict,” Lee says, “But Dr. Pollock didn’t interrupt me until I was done speaking. Once I finished, he told me he felt the exact same way — and that his work centered on removing the blame on people and instead addressing the underlying issues that are causing people to suffer.”

After hearing what Lee was interested in, Pollock knew that there was a project that would be a perfect fit. When Pollock was trying to access information from the Prescription Drug Monitoring Programs (PDMP), an electronic database used to track controlled substance prescriptions, he ran into roadblocks. The PDMP data is valuable to Pollock’s work, as it can be used to link phenotypes for substance use to individual’s generic data to identify genes that underlie addiction. Because each state records and stores their information differently, with different laws in place for access, obtaining the information he needed was a challenge.

“Since Vivian was interested in the public policy that relates to drug addiction, this was an opportunity to do some analysis about access to this information,” Pollock says. That analysis involved calling the PDMP managers from each state and familiarizing herself with the laws that determine how the information is accessed. At first, Lee says, working with Pollock was intimidating. “Once I got over that initial fear of working with someone in such a high position in government, Dr. Pollock treated me like a friend. Going to Fieldston definitely helped us understand each other’s values and why we were working on this project in the first place.”

What they found was that getting to the information stored in the PDMP involved navigating a maze of red tape, learning about and understanding the policies and laws for each state, and trying to evaluate information shared in totally different formats. “Some states would only answer yes or no,” Vivian says with a laugh, “while others would send us long paragraphs that referenced contradictory policies.” When asked how it felt trying to interpret the varied responses, Lee had just one word: “Overwhelming.”

Using the conclusions reached as part of the project, Lee and Pollock submitted a paper in the Journal of the American Medical Association (JAMA) and, just a month before Lee’s Commencement, it was accepted for publication.

For Himmel, the partnership between Lee and Pollock sums up the value of a Fieldston connection that transcends generations. “Over the years, I’ve seen dozens of these connections help propel alumni forward in their careers. There’s a common bond among Fieldston alumni — they will always go out of their way to help each other.”

This fall, Lee started at Wellesley College, where she is studying political science and biology. Graduating from Fieldston hasn’t spelled an end to her work with Pollock — the two alumni will continue working together on projects while Lee is in college. “I want to keep pursuing my interest in healthcare,” she says, “in a way that will allow me to keep advocating for the things I care about.”

Recently, ECFS was awarded a grant from Association of Clinical Research Organizations (ACRO) to create the Glen de Vries ‘90 Science Research Fellowship and Endowment Program, honoring the late alum and medical science and pharmacology entrepreneur. The fellowship will enable future students in the FSRP to participate in a guaranteed third year of the program with an additional summer research opportunity, be paired with a mentor from ACRO, attend at least one scientific research conference, and present their advanced research findings to a panel each spring. Each Glen de Vries Science Research Fellow will build on the legacy created by de Vries, with lifelong commitment to exploration, questioning, and a desire to make the world a better place through science. 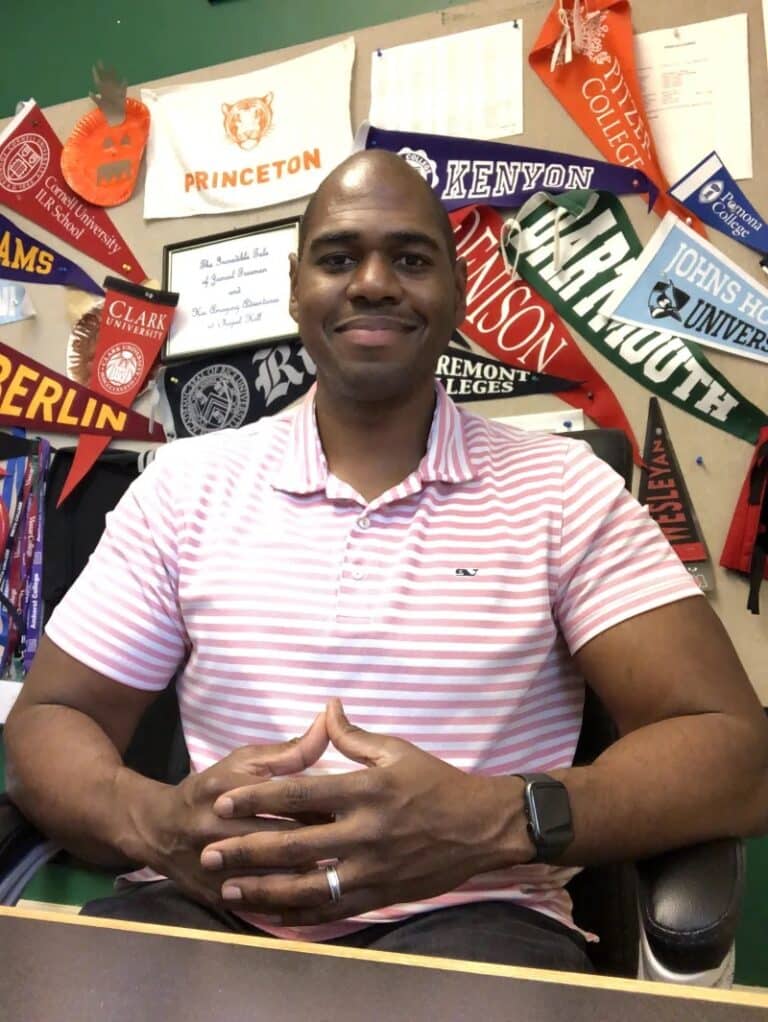